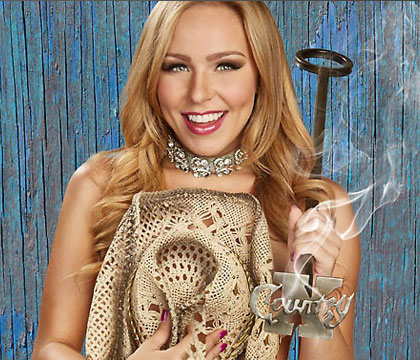 The producers of X Burlesque, X Rocks, and X Comedy have announced the newest addition to the “X” brand, with the premier of the X Country show Vegas, inside Harrah’s Las Vegas. It will be a topless cabaret showcasing exhilarating performances from the popular X Country Girls, who go all out to fulfill your every fantasy. Staying true to their brand, these X Country Girls feature the most stunning and talented performers on the world-famous Las Vegas Strip. These girls are known for teasing and seducing the members of the audience to popular country music songs from such artists as Taylor Swift, Tim McGraw, Garth Brooks, Hank Williams Jr. and Patsy Cline among others. The X Country show Vegas was created by Matt Stabile and his beautiful wife and partner Angela, and the performance takes place inside The Improv. For people who are not fans of the country music genre, this is the show that’s definitely going to change their minds. Apart from the array of sexy dance routines on offer, you can also expect to go through a musical journey as the performers showcase both traditional and modern country music hits. Other genres such as country rock and blues are also included in the show. And don’t forget to book your ticket early because the queue for this show can be pretty hectic.

Features of the Show

The show will feature a country homage called “Down Home Cooking” to musical hits by Travis Tritt, Justin Moore and Jason Aldean. A classic striptease called “Champagne Wishes” will also be performed to “Fever” by Michael Buble. A tribute to a famed burlesque dance will also be performed to “Dream On” by Aerosmith. There will also be a scene where a saloon girl seduces a weary cowboy. As part of this revue, there will also be a short film featuring the X Country Girls highlighting an old musical theme-“He Done Her Wrong”, which was filmed in Nelson, Nevada, an old mining town 40 miles southeast of Las Vegas and really helps the cast members capture the feeling of the old west.

The X Country show Vegas promises to be a night to remember and so you should get ready to be entertained with the best of Country, with clever, original X-rated themes and nonstop action for 90minutes. During the performance, the audience is captivated by the riveting display onstage, and they are amazed at the dazzling costumes and creative choreography by the X Country Girls. With each musical number, these seductive dancers take the audience through a musical journey for a wild, sensual and exciting evening that they will remember for a long time.

The X Country show Vegas is performed in an intimate 180-seat theater-a setting that allows for a lot of up-close and personal interaction with the dancers, who venture out into the crowd and perform on a stripper pole in the center of the room. The seats are comfortable and there’s a relaxed feeling inside the venue. The staff are very nice to patrons and the dancers liven up the place with their high energy and cute and flirty costumes. There are video screens on both sides of the stage and they display some seductive footage, and help to introduce each dance member. During the show, there’ll be popular musical numbers that’ll appeal to everyone’s taste. From country to rock, there will be something for everyone as well as various musical styles that will allow each ballerina to display her individual talents.

Vegas visitors looking for entertainment will find that and more at Harrah’s Las Vegas in the heart of the Las Vegas Strip, where a festive atmosphere, diverse entertainment options and an action-packed casino permeate the property. There are unique restaurants that offer prime rib, succulent steaks, chicken and seafood. You can also enjoy a buffet that offers cuisines from across the globe. A full bar is available and there are delicious cocktails that you can enjoy. If you’re all about having outrageous, non-stop fun on the strip, the full bar delivers just that.

There’s an erotic striptease and shower in a tub, and it will be performed to Patsy Cline’s heartrending “Crazy”. Another routine is performed to “Better Dig Two” by The Band Perry and it features a striptease by a dancer who starts off in a full bridal gown. Three girls wearing thongs perform to “All Jacked Up” by Gretchen Wilson and you can also look forward to a seductive aerial ballet perfumed to “Thunder Rolls and Lightning Strikes”. Another highlight is three dancers with barely-there baseball uniforms who start performing to “Swing Batter Batter” and end with a leg show performing to “Honky Tonk Badonkadonk” by Trace Adkins. Last but not least, there are two lesbians on a bed undressing each other while performing to “Girl Crush” by Little Big Town.

CNBC called the X Country show Vegas the hottest show on the strip and it’s easy to see why. The sexy dancers and amazing choreography makes it the talk of town. In order to give the audience a chance to catch a breath, a mid-show comic gives guests some relief between performances. The sensual bathtub routine is one of the highlights of this sexy show and it’s known to be a crowd favorite.

You can become a country star onstage and perform with the X Girls when you buy a “Country Star Ticket”, and only one is sold per show. You will then get a chance to meet the sexy girls and also take a picture when the show ends. The “X-Burlesque University” is offering a chance for anyone interested to learn how to become a burlesque dancer.