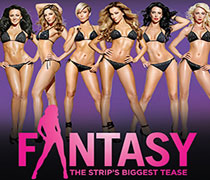 Also known as Sin City or The Entertainment City, Las Vegas is a city that hosts many shows and concerts Nonetheless, there is one special show, the Fantasy Show, and it is a show featuring eight professional strippers. It is a show that is dedicated to both singles and couples. It is a show that is featured throughout the year, and the ladies do their thing every night. It is called the Fantasy Show because the girls lure the guests into their fantasies. The girls are then helped in the entertaining the guests by Sean E. Cooper. Cooper keeps the crowd energized as he does his unique and notable impression of some of the top personalities of the pop culture....

The seductive show
The show is held in the Atrium Showroom that features 350 seats. The Fantasy Women come dressed in costumes that almost bare it all. They come dressed in bikinis, and they will make you glued to them as they do their thing. With their sexy costumes, you will see some things that might trigger your inner feelings. They come out as sexy schoolgirls, spicy Latin dancers, and rowdy cowgirls. These are some of the scenes that energize the show. Nonetheless, you will be taken to your fantasies when they drop all their costumes and reveal it all.

What do the girls offer at the show?
There are 14 dance performances, which include a solo pole dancing act by each dancer, a ménage à trios by girls only, which is one of the attention grabbers, and aerial performance. To top it all, the girls perform a slow and hot striptease when the start while dressed in a tight evening gown. They will slowly strip until they are left with nothing on them.

The Cast
Even though Cooper is one of the performances of the night at the show, he is the only male that is involved, though he only makes jokes with his clothes on. However, the ladies are the major attraction of the Fantasy Show Las Vegas. The show introduces new ladies after six months. That means that the show will keep on evolving, and new tastes will be available after every six months. The ladies are one of the sexiest dancers of the Strip and here is a look at their profiles.
• Jamie Lynch
She is the host and the lead dancer. Born in Salt Lake City, Utah, Jamie is a fan of music, acting, dancing, animals, and fashion. She also loves traveling too, and she wishes to travel the whole world and visit his top and most treasured destination, Bora Bora. Her top cities include New York, France, and London because they are cities with a blend of cultural history and the contemporary living. Amazingly, she is currently studying psychology.

• Ashton
Born in Burnsville, Minnesota, Aston loves baking and anything to do with cooking. She also loves watching the Food Network, where she learns more. She is a fan of singing, jet skiing, reading, and dancing. She has a great love for Jamaica, and she dreams of skydiving. On her first night at Fantasy, she wasn’t used to the fog, and so she missed the last stair and when all the way down.

• Amber
She was born in Dallas, Texas and is a fan of the National Football League and the UFC. She loves to sleep and travel too. She exercises a lot, which helps to keep her fit. She also yearns to perform on Broadway sometime in the future.

• Danielle
She hails from Huber Heights, Ohio and is a fan of football, food, and the Greek mythology. She also loves to workout, bake, craft, play with her dogs and dancing. Danielle lives in Las Vegas, and her favorite city is Japan.

• Delecia
She was born in Memphis, Tennessee and is a fan of films and fitness. She also thinks of becoming a trainer sometime after she is done with dancing. Working out is her routine activity, and she has also graduated from college with honors.

• Kristin
Her hometown is Port Washington, WI, and she also loves traveling a lot. She is a great fan of painting, and she dreams of driving a race car someday. Her favorite city is Sao Paulo in Brazil. She is also a fan of hairdos.

• Erin
She was born in Detroit, MI, and she has a great interest in men. She also loves traveling and dancing. She loves going out for an adventure, and she loves the sports in Detroit. She has visited all the seven continents and has also won the Fear Factor. She also thinks of becoming a mommy someday, maybe after Fantasy.

• Jennifer
She was born in Birmingham, AL, and is a fan of fashion and art. She also loves running, cooking, charity work, and reading. She has also won the Fear Factor. She loves Sydney and Rome and dreams of living in Australia someday.

Achievements of the show
This year, 2015, the show was named the Best Showgirls, thanks to the vibrant and sexy eight dancers. In 2012, it was named Best of Las Vegas Poll, and also the Best Topless Show in Las Vegas. Some top magazines like the Las Vegas Weekly and as Vegas Review-Journal recognized the Fantasy Show.

Conclusion
The Fantasy Show at Luxor is one place you will want to be. The best thing to do is go with your partner, since things can heat up, and you might be swept by the super seductive ladies. The show restricts entry to anyone under 18, and you might want to produce some ID to prove you are of legal age.