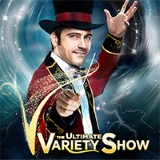 The Ultimate Variety Show is like seven shows rolled into one featuring fun, fast-paced specialty acts mixed with daredevil stunts to keep you on the edge of your seat.  E! Entertainment calls it the “perfect show for the entire family.” Each cast member in V – The Ultimate Variety Show is a master of his or her craft… skills, techniques and performances that have taken decades and in some cases generations to develop and perfect.

From well-known industry entertainers to newcomers from shows like American Idol and America‘s Got Talent, all acts are carefully selected to make sure they bring a unique experience to the stage - giving the audience everything they want all in one show from comedy and magic to aerial artists who fly out over the audience.

Explaning what makes the Ultimate Variety show the best will not due justice unless. We introduced the regulars of the show. Regulars that because of their amazing talent and ability to make people happy are always in every nights show giving laugh and glee to every audience.

Being both an entertainer, comedian and a host Wally Eastwood is one of the regular performers in Ultimate Variety Show. Being able to watch him juggle clubs, balls and hats in high speed can leave you breathless and asking for more. Add to the fact he is one great comedian and can really get a crowd going.

The very unique part of his act may possibly be the juggling act using his month, Yup, heard me right. He can juggle using his mouth. Seeing him perform is a site worth seeing. He can also play the piano using balls. Which highlights his impressive control and speed in the way he hits each note of the piano cord correctly.

Even before the Ultimate Variety show Wally has already made a name for himself but opted to stay with V due to he is happy there.

Melinda: The First Lady of Magic

What is more impressive than watching a magic show? Well watching it with a highly skilled and professional female magician. That’s right a highly skilled female magician. In the tough industry it is tough enough to penetrate the entertainment industry better yet succeed when many have failed. But because Melinda has broken gender barriers and proven that even women can be amazing magicians and not just pretty assistance. She has inspired other female magician to work hard and try to make a name for themselves just the way she did.She is not just an impressive woman with an amazing talent to boot but also a role model to women just like her.

Her forte happens to be in illusions and if you want to see this female Houdini in action, then better secure a ticket now for the Ultimate Variety show.

Contortionist plus dancing and you get Contortionist-style dancing. Building and polishing his craft lead him to Las Vagas where he now performs on a regular basis but before this Turf also had a rag to riches story. Turf life story is inspiring from dancing and playing music along the road for change, to joining America Got Talent were he wowed the audience with his unique style to dancing, to being a regular performer to the best Variety show acts in Las Vegas.Goes to show that as long as hard work and patient is invoice with a little bit of talent anyway can reach their dream.

The Crazy Gauchos – Stand up Comedians

Another regular in the show. Incorporating History, comedy, fancy footwork, audience interaction and a whole lot of laughs making this comedy act something that won’t keep you on your seat but make you start rolling on the floor.

With a performance this intense trust is the main foundation. The Skating Aratas a husband and wife duo performs the most death defying feat of ice skating the world would ever see. With performances with even the slightes miscalculation may cause the death of one of the duo, these duo continues to pursue their passion and in result their wows audience of Ultimate variety show with their grace, dramatics and death defying display of skill mere inches away from the crowd. They say it so close that the audience may even feel the breeze created by their stunts.

With impressive strength and impeccable balancing skills Iouri & Gabor is one of those acts that will keep you at the edge of your seat while holding your breath as these two fearless duo perform their outrageous balancing acts that threads in the fine line between success or a very painful fall. Showing different posture and position it will make you wonder how hard this two has work to make such an intense performance,

This is certainly a must watch if intense balancing acts are your thing.

Queen Elizabeth. He has tried it all, performed in crew ship, hotels and he even got invited to perform abroad making him a well and sought after performer. With his unique acts and comedic ingenuity he will make you laugh from all his different antics.

Trained at a young age in the art of gymnastic. Tamara Yerofeeza perfected her skill and represented her country in various competiotion racking in awards for solo and group. But in the end even after being an accomplish athlete decided to focus more in the artistic and emotional side of gymnastic. She has polish her act which landed her a slot as a performer in Ultimate Variety Show. With her beautifully artistic performance Tamara will win audiences hearts with her performance.