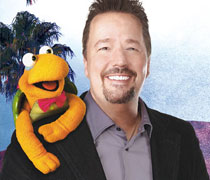 Terry Fator puts together an outstanding show in Las Vegas. It is a show that defies convention. The Terry Fator Show Las Vegas is part comedy, part concert and all entertainment. Bringing along all his sidekicks, get set to be entertained by the greatest entertainment talent not only in America but around the world today. Working with his incredible puppets, Terry will offer amazing spot-on renditions of some of the best songs ever made. It is an epic feat guaranteed to pass down as one of the standout entertainment shows of the year....

Who is Terry Fator?

Unless you have been living under a rock, it is inconceivable that you have not heard of Terry Fator and his incredible gig. Terry Fator is a native of Texas and is now aged 50 but his talents have earned him admiration from the very young to the very old. A truly prodigious ventriloquist, impressionist, comedian and singer; Terry is now a household name in America and beyond. He first came to the limelight when he won the second edition of America Got Talent in 2007. Since then he has risen to epic levels, redefining family entertainment than any other single act in our time. He has been featured on the Late Night Show with David Letterman and also The Oprah Winfrey Show among other highly billed appearances on prime time TV.

While Terry Fator is a class act all on his, the crew he brings along with him will crack your ribs at the drop of a hat. His retinue of sidekicks include Winston, an impersonating turtle who does a downright funny impression of, you guessed it, Terry Fator himself! Add to his incredible box of tricks some rather fetching renditions of the catchiest Maroon 5 as well as Roy Orbison hits and you will never look at a turtle the same way. Prepare to be wowed by the most incredible renditions of Marvin Gaye and The Platters all the courtesy of Julius. Lovers of country music will have more than a fair share of entertainment listening to the likes of Brooks & Dunn along with some of Garth Brooks' greatest hits as sang by the truly talented Walter T. Airedale.

Other notable friends accompanying Terry Fator on his show include Vikki the Cougar who will be wowing the crowds with uncanny renditions of the best of Pussy Cat Dolls music. Also eagerly awaited is the show by Wrex, the Crash Test Dummy, singing about his Little Red Corvette. While it is true that many Vegas shows would consider such acts as more than enough to offer a show, these are but half the retinue Terry Fator is bringing along to his headline show.

Winston is undoubtedly the star of the Terry Fator show. Indeed, the unabashed turtle calls the show his own. He claims he won the America Got Talent contest for Terry and, once you listen to his more than passable impression of the man, you cannot refute the claim. Winston is on the verge of launching his Hollywood movie career too.

Rusty is a prototype robot, designed with the ability to do all kind of jobs at the Mirage. But cleaning, cooking and setting things in order are not the only talents of this humanoid. He has some well coordinated vocal chords capable of singing in the voices of such greats as Elvis Presley, Tin Man and even Garth Brooks. His uncanny impression of a crooning Bruno Mars always elicits a standing ovation from the audience.

Meet Hyphen, a rather diminutive figure with a booming voice nonetheless. Hyphen's quest for stardom has been latent for years. Indeed, he claims to have been a member of the Beetles until they told him to go solo instead.

Meet Julius, the rather eccentric performer from the Apollo Theater. There is nothing he loves better than to regale the audience with impressions to prove he is way cooler than Terry himself.

Maynard is the greatest impersonator of the King Elvis Presley himself with just a small caveat. Yes, Maynard does not know any of Elvis' songs.

Never mind the rather pretentious name of this amazing character in the Terry Fator Show Las Vegas show.

Wlater is the quintessential country singer of yore. His lifelong ambition is to run for the Presidency of the United States. Never mind that he is nothing but a dummy. Walter does not let this status hold him back. As a matter of fact, he believes being a dummy would help him blend right in were he to get to DC as the C-in-C.

If you thought there was nothing funny about being a crush test dummy, Wrex will turn your ideas right on the head. Wrex does not let the fact that he is constantly on a head-on with the 8-wheeler of fate hold him to ransom.

Emma Taylor is a rather fetching 12-year old who is obsessed with selfies. But her real claim to fame has to do with her rather loud singing voice.

Vikki is the quintessential cougar. She has the looks and plays the part aptly well. Always on the prowl for young men who live rich but see poorly, her one liners and kickbacks will leave you tittering on the floor.

Duggie is the nasty neighbor Terry is forced to tolerate. A hard partying redneck, Nevada is brash, crude and doesn't care about others' opinion of him.

Berry is the entertainment attorney par excellence. He has dashing looks and an eye for stylish women. But he is also a pretty good singer. That and, of course, suing people at every turn are his life's true loves.

True to his native roots, Kani is a multi-dimensional character who loves the Mirage buffet no end. His singing talents are as prodigious as any of the crew and his acts on the chillax and Ukulele are literally out of this world.