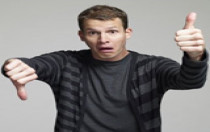 Daniel Tosh, risque comedy extraordinaire with his deliberately offensive black comedy style is coming to Las Vegas and is likely to stir up a storm on stage if he remains true to his tradition. The controversial comedian is known for Tosh.0, his show on Comedy Central, and has several sold-out stand up performances and tours to his credit. At the moment Tosh has lined up four dates for his Las Vegas tour in March and April, 2016 at the Mirage Hotel and Casino. If past records is anything to go by, those interested in watching him live will do well to get their hands on tickets before they sell out. Tosh may offend many with his jokes, as he sets out to do. But many audiences will find a hook in his sarcasm, satire and tendency to pick on the worst in human nature that draws laughs from crowds around the world.

Tosh has been making a name for himself in the field of comedy for television and as a stand-up comedian since 2000. The forty-year-old has had appearances on shows such as the Late Show with David Letterman, The Tonight Show with Jay Leno, Comedy Central's Premium Blend and Jimmy Kimmel Live! Tosh has been performing since 1998, when he first appeared in Just for Laughs in Montreal. His first long-duration stand-up special was a 30-minute skit on Comedy Central Presents in 2003. Tosh had given himself the deadline of his 38th birthday to make it big as a comedian, and set up a countdown clock on his website for that purpose.

Tosh is the son of a minister of the Presbyterian Church and graduated with a degree in marketing. Despite his seemingly straight-laced beginnings, he was sure straight after college that he wanted to make a living in comedy. According to Tosh, he never got a real job, and naturally gravitated towards comedy because of his Florida origins. Tosh claims that 'flat, hot and dumb' Florida is what shaped his instinct for comedy. For lovers of bawdy, no-holds-barred black comedy, this was fortunate. Tosh went on to perform Daniel Tosh: Completely Serious in 2007. He also became the executive producer for Brickleberry and the host for Tosh.0 since 2009. Tosh took on a few acting roles along the way, and was worth $16 million in 2015 (as estimated by CelebrityNetWorth).

The German-born comedian's third comedy album aired on Comedy Central in 2011 and was also released as a DVD to achieve great success. It reached number 1 on the US Billboard Top Comedy Albums chart that year and number 28 on the US Billboard 200. Opening acts on the album were performed by Matt Fulchiron and Jasper Redd.

In 2012, Tosh became the executive producer for Brickleberry, an animated sitcom series on Comedy Central. The plot involved the daily lives of park rangers at Brickleberry National Park. The series was very popular with a younger audience, and its first season drew an average of 1.8 million viewers every week.

Tosh is best known for his Comedy Central act Tosh.0, which has been airing since 2009. He is the executive producer and host for the show, which comments on viral videos, celebrities, popular culture, society and stereotypes. Wildly successful with its young male audience between the ages on 18 and 24, the show reached top ratings in its timeslot. There were over a million viewers each episode in the first season. Originally intended to be 10 episodes, the first episode went on to air sixteen instead. This was followed by a second season and since then it has become a regular show on Comedy Central. Tosh.0 has often been compared to Talk Soup (on E! Channel), Sports Soup, Web Soup and other similar shows.

Tosh has played some small acting roles throughout his career. He played a criminal in the MTV show Punk'd. HBO's Elevator saw him play a fictional version of Daniel Tosh. He has also co-acted with Mike Myers in a small role in the film The Love Guru.

Tosh's jokes have often offended certain parties as they were intended to, but in 2012 a minor scandal broke out over his 'rape jokes' at the Laugh Factory. A blogger at Cookies for Breakfast called out a series of jokes by Tosh about rape. The backlash was enough to lead to a petition on Change.org to take him off air. The media covered the controversy at the time, and many groups criticized what they saw as his attempts to normalize sexual violence. At the same time, several other comedians stood up for Tosh's right to freedom of speech, and argued that the contents of his jokes had always been controversial without too much criticism.

In spite of his critics, Daniel Tosh continues to be a popular and popularly philanthropic man. In 2015 he spoke on his show about a friend and colleague Andie Ritchie to raise money for his fight against brain tumor. He has participated in shows for Alabama Disaster Relief and for late fellow-comedian Greg Giraldo. His annual show called 'Tosh Saves the World' sends its proceeds to several charities. Notable performers like Chelsea Peretti, Bo Burnham and others have been on the show.

Tosh started on a sixty day stand-up comedy tour across the country in 2011. According to Forbes, his shows were sold out on this tour. Similarly in 2014, the performer enjoyed shows that were sold out. The average ticket price for his shows was reported to be nearly $162 by Forbes, in 2014. While the audience and ticket sales figures prove his popularity and resonance with a certain demographics, critics have not always been kind to this prodigal child of comedy. He has been called out for his hilarious cruelty. The tone of his jokes have been called highly rationalized but vicious, shocking and only sometimes, offering redemption.

Love him or hate him, Daniel Tosh is a witty and hilarious presence on stage. Watch him live at Las Vegas this spring and see for yourself if Tosh's brand of humor is your brand of humor.