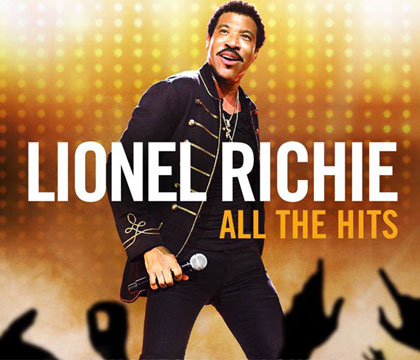 Lionel Richie began his career in 1968, performing as singer and saxophonist of the R&B group, The Commodores. The band hit their peak during the late 1970s and early 80s, a time when Richie took over co-leader singer duties. With hits like, “Three Times a Lady”, “Nightshift”, “Brick House” and “Easy”, The Commodores proved themselves as a bonafide success. It was during this time that Richie also proved himself to be an incredibly talented songwriter, a skill he would later use to write for other artists, such as Kenny Rogers, as well as for his own solo material.

In 1982, Richie embarked on a solo career after the success of his number one hit duet, “Endless Love”, with Diana Ross. His solo career spawned numerous number one singles and radio hits and as a result, sold millions of singles and albums. To date, Richie has sold over 100 million records worldwide and is considered to be one of the world’s best-selling artists off all time.

Not content with just record breaking sales, Richie has been nominated for several Grammy Awards, winning a total of four, including the 1985 Song of the Year for “We Are the World”, a song he co-wrote with the late King of Pop, Michael Jackson. He has also been nominated twice for Best Original Song at the Golden Globe Awards, winning in 1986 for the film, “White Nights”.

Most recently, Richie released an album entitled, “Tuskegee”, in 2012, which found the singer reinterpreting his catalogue of hits as duets with a laundry list of popular country music artists. The album peaked at the number one spot on the Billboard Country Albums chart as well as the US Billboard 200. To date, it’s sold over a million copies, reaching platinum status in the United States alone. To support the album, Richie embarked on an extensive tour of Europe that spanned over 15 countries, including, France, Denmark, Finland, Sweden, Ireland and the United Kingdom.

Following his European tour, Richie again announced another giant tour. The tour, entitled "All the Hits, All Night Long", serves as the basis for his residency shows. It ran from September 18, 2013 to July 20, 2015 and included dates in North America, Europe and Asia in which Richie performed to sold out crowds.

As the title of the tour suggests, Richie will be performing all of his greatest hits throughout the night to the Las Vegas crowds, which he no doubt has quite a few of. Not limited to just his solo work, he’ll also be drawing from his early days with The Commodores, as well as performing his signature duet, “Endless Love”, originally recorded and performed with Diana Ross.

Throughout his solo career, Richie has amassed an impression number of international hit singles. He currently has a total of 13 Top 10 singles, five of which took the number one spot on the US Billboard 200 chart. The Las Vegas audiences can expect a similar setlist to the road tour, which included songs from Richie’s solo catalogue, such as, “Truly”, “Dancing on the Ceiling”, “Hello”, “Running with the Night”, “Say You, Say Me” and “All Night Long (All Night)”.

Audiences can also expect a few surprises thrown in for good measure and it’s not unlike Richie to perform a medley or two of some of his best known songs.

Setting up his residency at Planet Hollywood Resort & Casino's The AXIS, Richie is looking to replicate the success of the touring show for Las Vegas audiences. Unlike his 2015 tour, which spanned over dozens of cities and countries and included a total of 125 shows over the course of two years, the Las Vegas residency is a limited engagement.

Beginning on April 27, Richie performs one more show in April on the 30th before continuing the three week long first leg of the residency into the next month, eventually concluding on May 18, 2016. The show will be performed Sundays, Wednesdays and Saturdays for its duration. After a three and a half month break over the summer, the show will pick back up again on September 21. Again performing on Sundays, Wednesdays and Saturdays, the residency will finally close three weeks later on October 12, 2016.

In total, the residency will cover a total of 20 shows at the AXIS on the Las Vegas Strip. Lionel Richie will be in good company in Las Vegas, as audiences have been particularly favorable to standing residencies in the past, including long-running shows from many other high profile artists, such as Cher, Shania Twain and Britney Spears, who also held residency at the AXIS. Residency shows are typically only offered to musicians who are able to fill the seats and Lionel Richie has proven throughout his touring career that he can do just that.

For residency shows at The AXIS, the theater holds up to a seating capacity of 4,600, which is different from their regular shows, which hold a maximum of 7000 people. This smaller seating capacity allows for a more intimate atmosphere for audience members and one that serves the songs as they were intended to be heard. The smaller venue also means the crowd will be treated to an up close and personal show that is unlike anything they’ve seen or heard before. Audiences can expect an amazing view of the performance along with stellar acoustic and amazing audio.