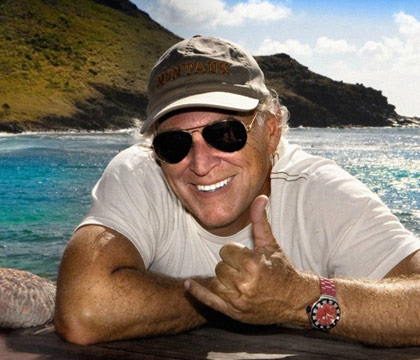 Jimmy Buffet will be performing in Vegas at the MGM Grand Garden Arena. If you have previously missed his other shows, you'll definitely want to catch this one.

Who is Jimmy Buffet?

He is a celebrated singer, songwriter, author, actor, and businessman. His world is diverse, and he has achieved extraordinary success in all his undertakings.

His laid back music introduces his personality, the hit song 'Margaritaville’ was included in the Recording Industry Association of America’s list of Songs of the Century.

Jimmy Buffet got signed with Barnaby Records in 1969 in Nashville Tennessee, as a country artist, marking the start of his career. His first album Down to Earth didn’t sell very well though. He went back to the studio to record another album- High Cumberland Jubilee. His early music life involves performing for tourists in New Orleans.

Buffet later moved to Key West and started putting together his beach band. He performed for drinks at the Chart Room Bar in the Pier House Motel. He was creative in blending country, pop, rock and folk with coastal and tropical lyrical themes, for a unique sound called the “Gulf and Western.” He dropped his third album called White Sport Coat and Pink Crustacean in 1973.Others of his albums around the 1970s include Living and Dying in 'Time, Havana Daydreamin’ and Changes in Latitude.

In the 1980s Buffet made more money from performances and tours than from his records. He continued dropping new hits for his fans but also branched out into business. He opened a Margaritaville store and Cafe in the Key West. Buffet and his Coral Reefer band got a chance to perform at the White House for President Bill Clinton in 2000. His album License to Chill topped album charts, the first in his music career. A few years later he teamed up with Sirius radio to form Margaritaville radio. Of his more than 30 albums, 8 are Gold and are 9 Platinum albums. No wonder the tickets to his concerts sell like hot cake.

He has written three No.1 best sellers. Tales from Margaritaville and Where Is Joe Merchant? featured for months in the New York Times Best seller fiction list. His 1998’s book A Pirate Looks At Fifty jumped straight to No.1 on the New York Best Seller non-fiction list. His other books include A Salty Piece of Land and Swine Not?

He has made many soundtracks for movies, together with many roles in Repo Man, Hook, Cobb, and Hoot. Other movies he has appeared in include Rancho Deluxe, From the Earth to the Moon and Hawaii-Five-O among others.

He created his own genre and style

His music has elements of Country and Western, along with rock and themes from the Gulf of Mexico coast. Buffet uses the term Gulf-and-Western to describe his style. He is a trendsetter in the music and industry, other artists started following his example. Other Gulf and Western artists include tribute bands, Norman the Caribbean Cowboy, Jim Morris, and Greg Taylor. The Gulf and Western songs can be heard on Buffet’s Radio Margaritaville.

His music is so unique and patched from different genres that it cannot fit into one box, a begrudging fact to critics. Few entertainers can draw the masses like Jimmy Buffet. The tickets to his concerts always turn out to be few because of his wide fan base. His lyrics and sounds conjure irresistible dreamy and nostalgic imageries that touch the cowboy hearts of his fans. His laid back personality has only served to catapult his name far up in the books of fame.

Las Vegas plays host to spectacular concerts and events. The MGM Grand is a 4 star hotel and casino located on the Vegas Strip. This hotel is known for entertainment, hosting TV shows and concerts. Equipped with 6,852 rooms it is the second largest resort hotel in the U.S. The 293 foot high property features five outdoor pools, rivers and waterfalls that cover 2.7 hectares. There is also 380,000 sq. ft. convention center, the MGM Grand Garden Arena and the Grand Spa. The property also houses shops, pas, restaurants, and nightclubs

As sure as eggs is eggs you can expect a non-compromising powerful performance from Buffet come October 18 and 25. If you are a 'Parrothead’ you already know this, and you will come prepared for a night to remember. Plenty of beer and discounted Margaritas is typical of his concerts.

At the Vegas show, Jimmy Buffet is expected to perform his old hits sweetened with his new tunes. He will be collaborating with his famed Coral Reefers Band for a lively show. It will be a chance to get served a cocktail of Country’s nostalgia, Rock’s dreams and the Coast’s laid back lyrics, only made possible by Buffet and his band. Despite his age, he is still a lively singer and performer, and as a bonus he mingles, shares drinks and jokes around with his fans.

The aspect of music an concert performances has drastically changed over the years, it is no longer about plain and dry acts. Today's fans want something memorable and that is what Jimmy Buffet tries to offer them, with each and very show.