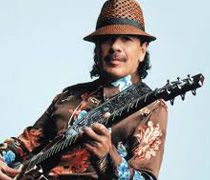 The famous Mexican-American rock guitarist Carlos Santana will be performing at the House of Blues at Mandalay Bay, in Las Vegas.
This Latin rock super figure has been a major force on the music scene since the early 70's and now he brings -one more time- his electrifying shows with the amazing guitarist melodises in Nevada, Las Vegas. You will have the chance to hear him rock the stage, by performing some great hits of all times, like 'The Game of Love, ', 'Into the Night', 'Cry Baby Cry' and many other.

His early years in musicCarlos Santana became famous in 1960s and early 1970s with his band, which was named Santana, and played mainly rock, salsa and jazz sounds. Since then they amazed their fans, who every year became even more and followed him to his tours around world. The electric mix of sounds made the members of the band a unique team of that time and worked together by performing amazing songs and gave great performances all over the world. Formed for the first time in 1967 in San Francisco, the band became notorious around the world at 1969's in Woodstock Festival. By combining traditional latin rhythms with rock guitar solos in the most unique way, Santana produced some early hits with tunes such as 'Evil Ways', which stayed on Billboard's top chart for two years and was soon followed by two more: Abraxas and Santana III. After many years of performances, the band found a new audience -after reinventing themselves on 1999's 'Supernatural', which mixed their usual -and patented- Latin rock sounds with guest appearances of famous contemporary pop stars, like Dave Matthew and Wyclef Jean, as well as the legend Eric Clapton and many others. The album had a great success. In fact it sold 15 million copies and won 8 Grammy Awards, including the 'Album of the Year'.
40 years of careerFor more than 40 years, Carlos Santana has sold more than 100 million records and has acquired million of fans all over the world with his amazing guitarist melodies. In fact he made and performed some great songs, which became hits. His most known singles include 'Black Magic Woman', 'Maria', 'Samba Pa Ti' and 'Oye Como Va' and many other songs. Moreover, until today the famous musician has won 10 Grammy Awards, including a record-ying nine for a single project.In the early 2000s, the 68 year old musician proved that he still remains relevant to modern music when he recorded, along with Matchbox 20 frontman Rob Thomas, the famous song 'Smooth'. Carlos Santana Las Vegas won three Latin Grammy's. In 1998, the group Santana was inducted into the Hollywood Walk of Fame. Moreover, Santana won two Grammy Awards as a solo artist. During his career he colaborated with great artists, like Rob Thomas and Michelle Branch.
New album 'Corazon'After his impressive career, you may think that he has accomplished everything in music and that there couldn't be anything more that he could offer to his fans. But Santana Las Vegas surprised the whole world for one more time. He released his spanish album, by the name 'Corazon' (22nd studio album) in May 2014. He produced his angular melodies with his guitar with the collaboration of Lester Mendez and with the biggest names in Latin music, such as Gloria Estefan, Lila Downs, Diego Torres, Ziggy Marley, as well as many others. But this particular album also marks his reunion with Clive Davis, the executive producer of 'Supernatural'. His studio at that time was filled with artists like Dennis Chambers (drums), Karl Perazza and Raul Rekow.

Grammy Awards & Collaborations In addition, he was nominated in nine categories at the Grammy Awards, including the 'Supernatural' (album of the year), Record fo the Year and Song of the Year (both 'Smooth') and he won in every category. With his 8 awards, he tied Michael Jackson's record in 1983 fro most Grammy Awards won within a single year. He followed up in 2002 with the album 'Shaman', which in fact receve many accolades. Santana and Michelle Branch won the Grammy Award for Best Pop Collaboration With Vocals for the song 'The Game of Love', which was really loved by his fans. Moreover, many other interesting collaborators appeared on his next album, by the name 'All That I Am', which was released in 2005. He also worked with Mary Blige, Steven Tyler, Los Lonely Boys and others for this particular album. Four years later, in 2009, Carlos Santana received a Lifetime Achievement Award at the Billboard Latin Music Awards. He also debuted his own music review 'Supernatural Santana: A Trip Through The Hits, which was performed at the Hard Rock Hotel and Casino, in Las Vegas, Nevada, the same year. Carlos Santana Las Vegas e continued to take his music on the road and actually played in numerous tours every year, with many fans following him all the way. In 2013 he became a recipient of the Kennedy Center Honors.
Tickets at his concert in Las VegasYou better be fast if you want to find tickets for Carlos Santana Las Vegas, because they are really selling fast. Give yourself the chance to witness his electribying performances of the rock icon musician. Keep in mind also that the show will start at 8.00 pm and the prices start at $129.50. Seat and drink packages are included in one show ticket. Above all don't forger that the famous guitarist and singer is on the verge of selling his 100,000 the ticket to his resident show this year at Mandalay Bay and you have to make sure to shot at winning a prize package and you never know. You might be the lucky one to meet the guitar legend.