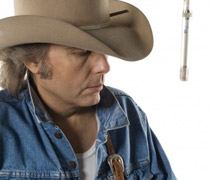 The celebrated singer-songwriter Dwight Yoakam will be bringing his soulful country voice to Las Vegas on December 8th. The much-awaited show will take place at The Cosmopolitan Hotel and Resort. Dwight has been topping charts since the 1980s; he has recorded more than 21 albums and compilations and sold more than 25 million records. Five of his albums have reached number one on the Billboard, 12 have been certified gold and 9 platinum.

This artist known for his pioneering country music is also the most frequent guest in the history of The Tonight Show. Dwight was born in 1959 in Kentucky and has been active in the entertainment industry since 1984. Apart from music, he is an acknowledged actor and director. Some of the movies he has starred in include the Sling Blade, Panic Room and Hollywood Homicide. He has appeared in the Dirty Girl and The Last Rites of Ransom Pride. Some of his songs are included in these movies.

Dwight had his break in music career in Los Angeles, having had no luck in Nashville because of his hillbilly style. He managed to push to stardom with an opposing style of country and country rock. His debut hits Honky Tonk Man and Guitars, Cadillacs launched his career. Honky Tonk became the first ever country music video played on MTV. He was described by Vanity Fair as the one who strides the divide between rock’s lust and country’s lament. In the last decade his albums include Blame the Vain, Dwight Sings Buck and 3 Pears released in 2012 after he resigned with Warner Bros Nashville.

3 pears reached number one on the American Radio Chart. It was named the annual best of lists by NPR, Rolling Stone, American Songwriter, The Village Voice and Rhapsody. The song Guitars, Cadillacs appeared at number 94 in Rolling Stone’s list of 100 greatest Country Songs in 2014.

Dwight Yoakum’s show in Vegas is expected to be a success with big turnouts expected. Fans are exited, because Dwight is one of Country’s most important superstars. He never fails to put up a strong performance. Fans see past his age, because his pure voice still feels like chocolate to the ears. Dwight is still the man. In his recent shows Dwight Yoakam has been praised for his high energy and long hours of performance, unlike his young counterparts who put in some 15 minutes and then run off the stage.

Dwight’s music culture remains uncorrupted. He has managed to remain Dwight Yoakam in an era where artists reinvent till they lose their true selves. This is a major draw for his fans who like to hear their oldies performed by their original artists.

At the Vegas show Dwight is expected to perform his old hits spiced with his recent tunes. He will be collaborating with his band of multi-talented players to give a good performance. His band includes a drummer, a bassist, and a man on keyboard, guitar, and other instruments. Dwight and his experienced band are the experts in blending country, rock, and hillbilly with soul all bowled up in a lip-smacking smoothie.

Dwight Yoakam will appear at the Venetian Theater on Friday June 13 and Saturday June 14.The resort is located in the heart of the Vegas Strip. The two nightstands with Dwight will be a memorable event, because the resort has an array of dream come true facilities. The resort offers 4, 2028 luxury suites. Nearby are restaurants run by distinguished chefs including Daniel Boulud, Thomas Keller and Mario Batali to mention a few.

Few entertainers have the entertainment magnetic power that sells records and draws fans like Dwight Yoakam with his unique style. His name immediately conjures up irresistible and compelling imageries among his fans .The cowboy hat and blue jeans and attractive tunes with intense lyrics that captures emotions and wins hearts of many cowgirls and cowboys. His acting personality has only served to, further elevate his name in the hall of fame.

In his 3 Pears album which is the latest, Yoakam has demonstrated an ability to integrate different concepts and genres into a cohesive masterpiece. The album draws from his country core with a serious embrace of rock, pop and soul. As the artist reflects, “Music is a bit of mystery. Like all emotions are. And I think maybe it was something I needed to express and to share with the world at large, something positive when all of us are kind of carrying around this collective, emotional weight.”

At the beginning of his career, Nashville producers thought that Dwight Yoakam was not the material stuff that good country musicians are made of. The truth is that his music is so unique and patched from different genres that it cannot fit into one box. However, Dwight Yoakam rose to beat all odds and set new trends in the country music scene. Like his own icons including Elvis, Merie and Buck, Yoakam is an extraordinary artist.

Some of the captivating tunes from 3 Pears include Heart Like Mine which is puts country guitars on a pop and rock melody. Dim Lights, Thick Smoke and Loud Music are other hit singles from the album. Yoakam’s works and previous performances demonstrated a man who is relentlessly searching for perfection, searching for the musical truth and uniqueness. His fame has never compromised his artistic integrity. He stands out from other artists, and so do his performances.

Dwight’s Vegas show will not be compromising. If you have previously missed, his other show this is the chance to go witness a superb performance. It is the chance to go hear his sing about romance and broken dreams of this hard life, heartaches, hope and optimism. You will relish his voice and lyrics with a scenic view of the Vegas strip. You will create memories to cherish for long.