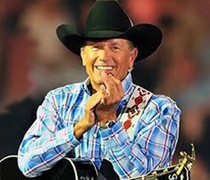 He was born George Harvey Strait on May 18, 1952, in Poteet, Texas. He has built a reputation as the King of Country after adopting a contemporary style of country music at a time when pop music had taken over in the 1980s. George is a singer, music producer, a songwriter, and an actor and undoubtedly one of the biggest names of all time in recording.

George Strait’s successful music career can be traced back as early as 1981 when “Unwound”, his debut single became an instant hit. His seven albums would go on to become country chart-toppers in the 1980s before he was named the Artist of the Decade in the year 2000 by the Academy of Country Music. His album Troubadour won him his first Grammy Award, and he was also named the CMA Entertainer of the Year in 1989, 1990, and 2013. He broke a record in 2009 with a whopping 44 number one hits in the Billboard’s Hot Country Songs, eclipsing the long-standing record held by Conway Twitty, who previously had 40. Strait has made sales of more than 100 million records so far, making him one of the greatest artists the planet has ever produced.

It’s going to be close to two years since he last performed with his band and he could hide his excitement. In a statement after the dates were released, Strait said that he was looking forward to playing out there for the fans who he owes a lot. This final George Strait Las Vegas concert is expected to relive golden moments of the past, with Strait rolling back the years with a combination of oldies and new music.

The announcement to quit touring was made in September 2012, a few months before his previous tour kicked off in January 2014. If what happened on June 7, 2014, is anything to go by, this final concert is expected to be massive in all perspectives. Over 104,000 fans thronged the AT&T Stadium in Arlington to watch the King of Country perform live.

During the announcement of the upcoming Vegas tour, George Strait also dropped the news that he was working on a new album titled “Cold Beer Conversation”, which has since been released. The title track is the latest song of an album consisting of 13 tracks featuring several other country artists. Tracks on the new album are as follows:

5. Something going Down Ft. Tom Shapiro and Jamey Johnson.

6. Take Me to Texas Ft. Brandy Clark and Shane McAnally.

13. Even When I Can’t Feel It Ft. Dean Dillon, Lee Miller, and Ben Hayslip.

Strait expects this 2016 Vegas tour to be different from Frontier, his very first concert in Las Vegas early in his career. He admitted that the first show was a real challenging, but he learned a big deal from the experience. It was that bad time when pop music was the big thing, and everyone was getting swept away by the wave. Strait denied all odds to rejuvenate country music, which he successfully did and today he can claim to be among the top country artists alive. He is aware of the expectations of his Vegas fans, and this being his last tour; there is no room for let-downs. Las Vegas will be exploding come April, as fans can’t wait to have probably their final glimpse of the King live at the Las Vegas Arena.

Not Retiring, Just won’t be Touring

Country Music lovers can get a consolation from a man who has graced their lives for 35 years by learning that they won’t be hearing his last just yet. He announced that he will not be touring again after the George Strait Las Vegas Tour, but made the timely promise that he is still in the industry. Better still, he also promised to be running live shows on a regular basis, at least until he feels that it is time to hang the mic. For now, though, fans can still enjoy while he’s still around. His music will be available on iTunes though, and fans can always get it whenever they want.

Passing on the Mantle

His latest Album, Cold Beer Conversation features several singles done with his son Bubba Strait in what is seen by his fans as a way of passing on the legacy. There is no refuting that George Strait is a great name in the game, and enthusiasts are in for a concert they won’t forget in their lifetime. We all know how good a songwriter Strait is, and we should brace ourselves for long years of the more for those who believe in the “Like father, Like son” theory. It would be a memorable moment to celebrate with the showbiz legend as he give the best of his performance in the last gig.