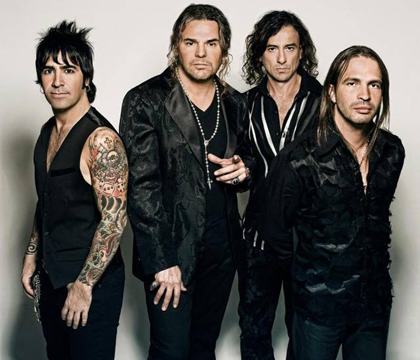 When it comes to seeing shows in Las Vegas, there are plenty of options available to you. Depending on where you staying within the Strip in Las Vegas, you could have multiple options within each hotel each night to catch any kind of show you want. Las Vegas is full of acts, whether they are dancers, performers, magicians, and of course, music acts. With the Music Acts, there are some acts which are in Las Vegas permanently, and then there are other acts which come in for one night only. And when that is the case, you need to ensure you know as much about each act coming in, to see if you want to check out their show or not. One such act is Mana.

Mana is a group from Guadalajara, Jalisco, and they considered one of the best Mexican Pop bands ever. They have received eight Latin Grammy awards and four Grammy Awards, along with 19 Billboard Latin Music awards, five MTV Music Awards and six Premios Juventud awards. They have sold over 40 million albums worldwide, and are often compared to U2, as they have been compared to U2 for the amount of influence they have had within the Mexican Pop genre. They are considered to be the most successful and influential Latin America band in the history of this genre. Their music varies between different genres, including Latin Pop, Reggae, Ska, Calypso and Pop Rock.

The group was formed in 1986, and they have put out eight different albums over the course of time. They chose the name Mana because it represents meaning of phrase Positive Energy. The most successful album was Dónde Jugarán Los Niños, selling a staggering 10 million copies worldwide, including over 700,000 within the United States. This album was released in 1992. They recently released an album in 2015, and are currently touring various parts of North America, along with South America and Latin America.

Who is in the Group?

The group has seen changes over time. It was founded by lead vocalist Jose Fernando Olvera, along with Juan Calleros – bass guitarist – and Ulises Calleros – Guitar. They then found their drummer, who was fifteen at the time, Alex Gonzalez. When first starting out, they would perform around 250 times a year across all of Latin America.

In 1991, two key components were added to their band; Cesar Lopez came into the band playing Guitar, and Ivan Gonzalez played the Keyboard. This was due to Ulises Calleros stepping down from the performance part of the band, and became the band’s manager. In 1992 with their breakout album scorching the sales charts, the performed on an international stage, as they played over 260 concerts in 17 countries.

In 1994, both Lopez and Gonzalez left the group, leaving them to be one album wonders with this group. This left them searching for a new guitarist, and they discovered one in Sergio Vallin. In 1995, the group worked on reinventing their sound by adding in some soul and funk music into their repertoire. This was a departure from their standard music, and left fans wondering if the band had gone off the rails.

The current group is made up of Olvera, Gonzalez, Vallin and J. Calleros.

Rise and Fall of Certain Albums

Soon after, they went a few years in between album releases. In 1997, they released an album which was focused on the heights and the depth, the joy and sorrow of love. This album was released in 36 countries, and received the Grammy award for best Alternative and Latin Rock Album of 1997. In 1998, they did a short 18 concert tour with Santana across the United States.

They waited until 2002 to release their next album, which was a mixture of their own created sound, and the rock and roll sound from the 1960’s and 1970’s. This album led to their fourth Grammy award, and they worked collaboratively with some of the most iconic voices in Italy, including Zucchero, as well as Pavarotti & Friends. They also had the distinction of working with other iconic people and groups, including Queen, Andrea Bocelli, Ricky Martin, Deep Purple and of course, Bono from U2.

Four years later, in 2006, they released another album, which reached the #4 spot within the overall Billboard top 200 chart, entitled Amar es Combatir. This album contains the heart and soul of the group, and even though it was not their most successful album in terms of copies sold, they still made over $35 million in sales, by selling this album on both CD and a CD/DVD package. They also sold a DVD of a live show they did, showcasing the songs from this particular album.

In 2015, the band released their latest album, which was produced for the first time by an outside producer, who has also worked with Shakira and Gloria Estefan. This album focuses much more on the Pop-Rock side of the band, as they add numerous string arrangements in with some dance beats. It is considered a Rock Album with a surprising whimsical flair to it.

What to Expect at a Live Concert

When going to a concert for Mana, you will expect to hear all of their greatest hits from the last 30 years. There is a certain excitement that cannot be generated by other acts when Mana performs, and the anticipation of which song is coming next always keeps fans guessing. If you don’t have the chance to see them in Las Vegas, there are plenty of other opportunities to see them all across Latin America and South America. Mana will provide you with a great variety of music, and their talents will be on display for you to enjoy. Between hearing songs based within the Latin Pop, Reggae, Ska, Calypso and Pop Rock genres, these are blends you cannot hear from any other band. The messages of Hope and Love are transcendent messages, inspiring you to be better after you hear the band perform their songs live and in person. And despite the changes in band personnel, their heartbeat still goes strong, and you can rediscover your love of the band when you come to see Mana live in Las Vegas.