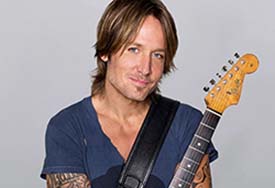 Keith Urban, country music superstar, is set to begin his residency in January of 2020 at the Colosseum at Caesars Palace. Keith began his music career at a young age after appearing on Australia’s TV show “New Faces.” In 1992, Keith made the move to Nashville and began his career as a country musician with his band The Ranch, which released a self titled album.

In 1999 Keith released his debut self-titled album, which included his chart topping single “But for the Grace of God.” After the release of his “Defying Gravity” album in 2009, Keith turned to the small screen as he became a judge on both The Voice and American Idol in 2012. Since his coaching days, Keith has released four more albums, each including award winning, chart topping singles. His latest album “Graffiti U” includes “Female” an empowerment anthem that was inspired by the Harvey Weinstein scandal. The following world tour visited 62 cities and included over two hours of music from the latest singles to songs from 1999.

Now that you have a lot of information on Keith’s concert in Vegas, one question is still running in your mind—which songs will Keith be performing in Vegas? There is no direct or fixed answer for that, however, a sample set list taken from a Kansas performance tell us that he will be performing the entire Ripcord album plus a few more hits such as: 'Long Hot Summer’, 'Where The Blacktop Ends’,'Somewhere in My Car’, 'Everybody’, 'Days Go By’ and many more other previous hits.