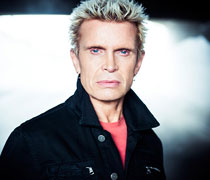 The Chelsea - The Cosmopolitan

Billy Idol the punk-pop legend is slated to return to Sin City this October for a multiple-show engagement. Idol has scheduled four concerts at The Cosmopolitan resort's Chelsea venue, on October 16, 17, 22 and 23. Occupancy at the concerts will be limited because of the COVID-19 pandemic, and attendees will be required social distance and to wear face coverings while they're not eating or drinking

So who exactly Billy Idol?

If you are wondering who exactly is Billy Idol is, then you probably wasn’t fan of Rock music especially in the 90’s when Billy was at the top of his game. Billy has however been able to continue to thrill audiences wherever he goes to date. Billy Idol is a legendary rock American rock star born and in London , he later moved to America where his career peaked . Billy started his music career at around 1977 when he joined the band Chelsea as a guitarist but later left with his band mate to form generation X. The band Generation X come to be one of the most successful bands of that time .The band for example was among the first bands to be aired on BBC Television doing punk rock . Billy Idol later moved on with a solo career and took the American fans by storm who had just gotten familiar with him with songs like “dancing with myself” .One of Billy’s songs for example “Flesh for fantasy ” climaxed at number four on the united states Billboard 100 in 1983. Further on Billy has continued to thrill audience and had a successful career including three Grammy nominations. For three decades he still reigns and thrill audiences wherever he goes .This great rock legend was who was one of MTV’s first stars will holding a concert in Las Vegas you can’t afford to miss. Enough said about Billy Idol so if you didn’t know much about him and was doubting whether to attend is concerts then with the above information about him you can easily make up your mind to be a part of the billy idol Las Vegas tour 2016.

Las Vegas is set to be thrilled by live performances by Billy Idol in March . If you have been a great fan of Billy idol and has never gotten the chance to attend any of his concerts then this is your opportunity. Billy Idol’s : Forever is set to take place at the House of blues . The concerts is scheduled for 6 days of March 2016 as follows : March 16th, 18th , 19th , 23rd, 25th and 26th at the same location.

Just to ensure that you don’t miss the chance to attend the concert another concert is set to take place in May 2016 . So if you will be out of the country or tied up somewhere during the March concert then lucky you because there is a May concert. The concert just like that of March will be held at the House of blue in Las Vegas .The concert will be held on six different days just like its March counterpart the dates are as follows: 4th May ,6th May, 7th May ,11th May , 13th May and 14th .

Where to buy your billy idol Las Vegas concert tickets

To be ready on time take an early step of getting your ticket as early as today. Last minute rushes usually end up badly plus getting you ticket as early as possible gets you to build up the anticipation for an event. This go a long way to ensure you will enjoy every bit of the show . To get tickets for the event you can simply check out more information on Billy Idol’s official website or buy them from websites like ticket master. Purchasing from such sites is easy all you need to do is select the event and in case select Billy Idol’s :Forever then follow the instructions that follow. Do not hesitate to enter billing information provided the site you are buying from is a reputable site for selling tickets. Your ticket will then be delivered to you as per you preferred delivery method .However before just buying randomly you may wish to consider some of the VIP packages available.