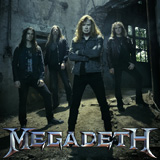 Megadeth is one of the pioneers of the American thrash metal movement. In 1983, Dave Mustaine, former member of Metallica, alongside bassist Dave Ellefson, created Megadeth. They released their debut album Killing Is My Business... and Business Is Good! in 1985, which attracted major labels to them. Throughout the rest of the 1980s, Megadeth made their mark as one of the most successful heavy metal bands of all time, releasing several hit albums, including Peace Sells… but Who’s Buying? and So Far, So Good… So What! Their fifth album, Countdown to Extinction, entered the Billboard 200 Chart at number two and was certified triple platinum in the United States. In 1993, the band was nominated for Best Metal Performance at the Grammy Awards, and has now received 12 nominations overall, with one win in 2017. In total, Megadeth has released 16 studio albums, sold 38 million records worldwide, and continues to tour across the world.

Why a Megadeth concert?

It is not just in the fact that they have ad tons of successful tours and them in Las Vegas will be even more amazing. A Megadeth Vegas concert will be absolutely electrifying and anyone that is a fan of this genre and has been in any concert of theirs will tell you that they have never disappointed even a bit. This year is a great one for Megadeth as it is their 33rd year together and the line up still stands to date. With worldwide tours that have grossed really well, this band is just never going to stop and this is why it boasts of being one of the greatest. The band has also record sales that are beyond the 50 million margin with 15 albums to its name. Five of these fifteen albums have earned platinum success in the US as well as Grammy nominations amounting to eleven in its career. So, getting to see Megadeth Vegas live on stage this year will be one of the best things that one can attend.

Being the lead guitarist on Metallica for two years since its inception, Dave Mustaine got kicked out because of substance abuse. His band mates, James Hetfield and Lars Ulrich didn’t think he was suited for the role because of his addiction and they dropped him. A couple of months after this, Dave and David formed Megadeth in Los Angeles and this was the start of one of the most successful ventures in the history of music in general. The name is a misspelling of the word megadeath that means a million deaths by nuclear explosion. They embarked on looking for other members to fill out the remaining roles which were not really easy and they interviewed over 15 drummers before they found the right one. Kerry King who was a former member of Slayer took the role of Rhythm guitarist and Lee Rausch was selected as the drummer. Lee Rausch was later to be replaced by Gar Samuelson and Chris Poland, a guitarist, joined the band on that fateful December of 1984. They signed to an independent label by the name of Combat Records, which was offering a substantial budget for their recording as well as touring.

They were given $8000 for the recording and touring by Combat Records but Dave’s drug problem had caught up with them again and they used up half of that money on drugs. This led them to subsequently fire their manager and record themselves their debut album. Although its sound wasn’t that clear, they attracted major labels due to the fact that the album was considerably successful in the underground metal circles. Killing is my business… and Business is Good, did pretty much well and this is what attracted major labels but the band chose Capitol Records. They recorded their second and third albums under pressure to deliver the success that the first album had. Peace Sells… but Who’s Buying? Was the second studio album of Megadeth and So Far, So Good… So What! followed up while enjoying considerable success in the mainstream. This is also the time that they made several tours with acts like Dio, Iron Maiden as well as opening for Alice Cooper. This is also the time that Dave got arrested for drunk driving and admitting in court that he had a drug problem and immediately entered rehab and became clean for the first time in ten years.

Rust in Peace success as well as Countdown to Extinction

Rust in Piece was recorded when all the band members were for once sober in the studio and this is why it enjoyed massive success. It even earned them their first Grammy nomination. This is another reason why Megadeth Vegas will be a must attend concert this year. It also marked the bands fourth album to achieve the platinum status and this fueled even more success for Dave and the band. Line up changes had occurred prior to the recording of this album and a lot of successful acts were pitted to join Megadeth but that was never to be. This also followed a string of successful tours with other big bands in the States as well as Europe. Countdown to extinction went double platinum and the band and it also won them another Grammy nomination. Megadeth enjoyed a lot of success with these two albums and they led to even more tours and concerts all over the world wit big acts joining the fray. So, a Megadeth Vegas concert is a show worth attending and if you are a fan, you will enjoy every minute of it.

Megadeth has been on tour for a while now and they never seem to stop doing what they love despite their age. It is in this light that many have fallen in love with this band and Dave is hailed as one of the best musicians of our time and this is no surprise. A lot of albums under their belt with immense success their way, Megadeth is just the kind of band to attend one of their concerts. So, Megadeth Vegas will be totally electrifying and will just be a tip of the iceberg that is this great band. Attenbdace to this great band perform is something you will never forget.