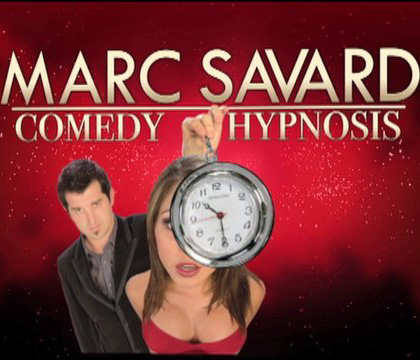 Marc Savard Comedy Hypnosis is an energetic mix of comedy, hypnosis and chaos. You can SEE the show or BE the show!

Watch hilarious audience volunteers live on stage as hypnotist Marc Savard controls their minds and their actions. You won’t believe what he can make them do!

In his opening act… Savard invites those, willing to surrender to the sound of his voice, up on stage. With a few funny tests, he quickly determines who is most susceptible to his hypnosis, ultimately narrowing it down to a small number of audience members.

Watch as his cast for the night surrenders to every assignment, each more unbelievable than the last. You'll be laughing the entire time!

Who is Marc Savard?

The figure of the hypnotist is often a mysterious and compelling one, and Marc Savard's charisma makes him a particularly interesting character. Born in the US, Savard is a totally self taught hypnotist, which means that his secrets are known to him and him alone: he has no teacher who is able to spill the beans on why he is so good at mind control. At the age of just 19, Savard found that he had perfected the art of mind control, and before he hit his 20s, he began performing to packed audiences. At the age of just 21, he had over 200 live shows under his belt, and this number ballooned even further after he arrived in Vegas and began hosting the Mark Savard Comedy Hypnosis show Vegas.


Savard and self hypnosis

At the age of 23, Savard was involved in an accident with a drink driver, and, dissatisfied with his doctors, he turned to the art of self hypnosis to help him with his recovery. He found that it worked! Savard thus turned his unfortunate experience with the accident into an opportunity to learn more about the art of hypnosis, and his experience with self hypnosis added profundity to his stage shows. This incident also spurred Savard to become an educator: he began speaking in schools about the dangers of drink driving, helping to inspire a generation of young people to stay safe on the roads. As with his hypnotism and mind control, with his public speaking roles, Savard is totally self taught.


What can I expect when I attend the Marc Savard Comedy Hypnosis show Vegas?

Laughter. Plenty of laughter. For many people, the stereotype of a hypnotism show is one in which the audience is totally rapt and you can hear a pin drop as the hypnotist works his or her magic. For some people, the hypnotist's ability to control people's minds is demonstrated by their ability to keep their audiences completely silent. Not so with Marc Savard! Savard has a talent for stand up comedy and he decided to use it to his advantage. He found that, contrary to the stereotypes, there is definitely a place for comedy and laughter in a hypnosis show. In fact, audiences are renowned for laughing so loudly at his performances that they can be heard all around. This makes the atmosphere at the Comedy Hypnosis shows relaxed and congenial, and Savard has so much charisma that it is hard not to break into a grin within the first ten minutes of his performance.


Is there anything else involved?

As with many hypnosis shows, there is usually a degree of audience participation involved in the Marc Savard Comedy Hypnosis show Vegas. Savard is known for calling up to 30 people from the audience onto the stage to join him, so that he can demonstrate his mind control abilities. It is generally believed that using members of the public as guinea pigs in this manner makes a hypnotist's show more believable. Whilst a hypnotist's stage assistant might be complicit in any pretence, there is no reason for members of the audience to be as they are total strangers to Savard. And so, when you see him work his magic on them you quickly start to think - wow, this is the real deal! But, when it comes to calling audience members up onto the stage, Savard does do things a little differently...

A process of elimination

Savard is very good at telling who will be susceptible to his mind control techniques and who will be resistant to them. And so though, as mentioned, he generally calls around three dozen people up onto the stage from the audience, he will send anyone back to their seat if he feels that they will be resistant to hypnosis. With the remaining chosen few, however, he performs some truly spectacular feats!


What will I witness at this show?

Savard often starts off his demonstration of his mind control powers very simply. For instance, he often plays the traditional game of 'it's feeling very hot, it's feeling very cold': a widely used hypnotic technique which makes members of the audience feel either that they are sweltering hot or that they are freezing cold (though, of course, the real temperature in the room has not changed). But then, he will move on to some truly spectacular stunts, including making hypnotized members of the public do the Riverdance in perfect formation and with perfect timing. Even people who have never danced before in their lives or who protest that they have the proverbial 'two left feet' will find themselves leaping high into the air, dancing authentically and skilfully! Do you dare to get up on the stage with Savard? What superpowers do you think you will discover within yourself if you do?


In sum: the Marc Savard Comedy Hypnosis show Vegas is an unmissable, hilarious evening for adults in Sin City

This show, which is recommended for audiences aged 18 and above, brings together the best of stand up comedy with the amazing powers of mind control. It is like no hypnosis show you have ever seen before - and like no stand up comedy show that you have ever seen before either. Involving an essential element of audience participation, and presided over by a charismatic and compelling host, this show is a highly recommended one for anyone who is visiting Vegas. Because of the unique atmosphere in the room during Savard's performances, this is a show that you really need to see live in order to have the full Marc Savard experience. Whether you are a die hard believer in the power of hypnotism or something of a sceptic, you are sure to enjoy this raucous, exciting, and intriguing blend of comedy and hypnosis!