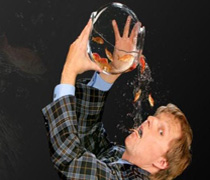 Mac King is a household name not only in Las Vegas, but in the entire United States of America. At the mention of the name, many might break into bouts of infectious laughter, while others might have a look of adoration on their faces. This is not anything out of the usual, seeing that this is the name of one of the greatest magic comedians in history. Mac King is certainly the best magic comedian in the entire world, a stand that even the Guinness World Record Book seems to agree with. Time after time, Mac King has been crowned with some award or other thanks to his sterling performances that leave his fans in awe of his talent every time he performs. But first, who is Mac King?

Mac King, King of Comedy Magic Shows
Mac King is a magician, illusionist, actor and writer. He was born on the 2nd of December, 1959, and is currently 56 years old. He resides in Las Vegas, in the state of Nevada. Interestingly, both of Mac’s grandfathers showed keen interest in magic; they were in fact amateur magicians. Little wonder their grandson is so talented at what he does. In fact, his interest in performing magical tricks started early in his life; as early as when he was ten years old. By the time he was in college, he was performing three magical shows a day over his summer breaks. So great was his passion in performing magic that he endured school, got a degree in anthropology, and still chose magic over conventional employment. This kind of relentless determination to make souls happy using tricks and illusions has certainly paid off in the long run, seeing that he is currently the most sought after magic comedians of all time.


Mac King Shows
Mac King hosts numerous shows, both on television and live performances. As far as television is concerned, Mac co- hosts several shows. He is in fact the only magic comedian who features in all the five NBC’s specials, a feat unachieved by any other magic comedian. In his show, The World’s Greatest Magic he teaches his audience a simple magical effect before and after the show, in a segment known as Mac King School of Magic. His tricks are known to be simple yet captivating and entertaining. After all, isn’t simplicity the mark of genius?

On the other hand, Mac is a thriving sensation as far as live performances are concerned. His base of operation is predictably his home city, Las Vegas. Most of his shows are held at the Harrah’s, in the Clint Holmes Theater, although every once in a while he does hold shows elsewhere. The overwhelming turn out for Mac King Magical show, Vegas, is undeniable proof that this magic prodigy knows how to keep an audience engaged, and this he does with apparent ease. He is a man who knows how to perfectly blend magic with humor; thrill with laughter, and this is why you should make a point to attend at least one Mac King Magical Show Vegas, where you will be able to witness for yourself the incredible talent that Mac possesses.


Why Should You Attend Mac King Comedy Magic show Vegas?
Anyone who has a sense of humor will tell that Mac’s shows are worth every single coin you spend on them. They are memorable, family- friendly shows that are way above average. Here are several reasons why when planning for an afternoon with family, attending one of these shows is a must- do:

First and very obviously is the fact that Mac King’s Magical shows are thoroughly entertaining. You really should see Mac performing his gold fish trick, one that has become synonymous with him. He can literally make gold fish appear out of someone’s mouth, or even over their head. Advanced magic, isn’t it? Plus, Mac owns a cloak of invisibility just like Harry Potter does, only that Mac’s is a yellow raincoat. The tricks that Mac can perform with this cloak often leave the audience holding their breath, or letting out gasps of terror as he does his thing. Nothing spells entertaining better, or is there?

Moreover, Mac is a very good- natured person. He loves to engage his audience as he performs, which endears him all the more to his audience. This is one way of completely abolishing boredom, because an actively engaged audience is highly likely to pay rapt attention to whatever you have to say. And better still, Mac commands the attention of his audience merely by his tricks and effects, not to mention his constant jokes. Can things get any better? So friendly is Mac that at the end of his shows, he takes time to interact one on one with his fans, signing autographs and taking photos. If only for this reason, Mac’s shows are certainly a must- attend. Who gets to share the limelight with a celebrity with such ease?

Mac the Author
Mac has co- authored several magic books that instruct readers on how to perform simple magic tricks. So basic are these tricks that they require no other equipment other than the performers own body, although there are several advanced tricks included in these books too. These books are Tricks with Your Head, Campfire Magic and The Great Ol’ Book- o Magic. These very interesting books are a must read for those who intend to further interact with the funny man who can work magic like nobody’s business.


Conclusion
Some may dismiss Mac for his choice of cloth, because he likes to clad old school, but this has absolutely no bearing on his theatrical performances. He is a man worth your time, attention ad money; his shows always rock. If you are wondering what to do in one of those free afternoons when you literally have nothing to do, save yourself boredom and attend one Mac King’s Comedy Magic show Vegas. It is a decision that you will certainly not regret; if anything, you will be waiting on bated breath for another show by Mac. Fun, thrilling, absolutely amazing, astounding and truly magical, these shows have certainly earned the fame that is all theirs. Mac King Comedy Magic show Vegas shows is certainly the place to be if you intend to have quality fun and entertainment, which is appropriate for people of all ages.