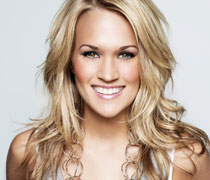 Becoming internationally known is the dream of many young aspiring musicians’, woman and men.  It's almost unheard of to have that dream come true and also be known as one of the greatest storytellers in the business at such a young age (32).  Underwood was the fourth season winner on the hit talent seeking show, American Idol in 2005.  Her winnings included a recording contract worth a million dollars, use of a private jet for a year, and a Ford Mustang Convertible.  In less than ten years Underwood has won more than 100 awards including seven Grammy Awards, became a respected member of the Grand Ole Opry and released five studio albums the last one being, “Storyteller” and it’s filled with intriguing characters, sensational ruminations on death, love, life, and heartbreak.

Vegastickets.com has great discounted prices for the Storyteller Tour: Stories in the Round tickets here on our easy to use website for all Carrie Underwood’s fifth headlining tour coming to a city near you in 2016! Underwood says her songs are “three-and-a-half-minute movies” being played on the radio.  From her first smash hit “Jesus, Take the Wheel” to more recent chart-toppers such as “Blown Away” and “Two Black Cadillacs,” “Something in the Water,” and “Little Toy Guns,” Underwood has 21 No. 1 hits including 11 that she co-wrote.  Not stopping at only a successful career in music, recently Underwood released her fitness lifestyle line, CALIA by Carrie Underwood, which was a smash hit during New York Fashion Week 2015.  Her four previous studio albums – Some Hearts, Carnival Ride Play On, and Blown Away – all certified Platinum or multi-Platinum, as well as all of them being named Country Album of the Year at the American Music Awards in 2014.  Underwood was listed as one of the 100 most influential people in the world in 2014 by Time magazine.  To date, Underwood has tallied 38 weeks at No. 1 on Billboard’s Top Country Albums chart with songs that have been streamed more than 1.5 billion times worldwide!  Picking up acting for a short time, Underwood played Maria von Trapp in NBC’s Emmy ®- winning  The South of Music Live!.  Currently, though fans are talking non-stop about her fifth studio album “Storyeller”, they love its action, drive the determination of each character created by Underwood and her team of co-writers.  The songs reflect times in Underwoods life that have seen the biggest changes come about, the biggest challenges and the biggest triumphs.  This album comes at a time when Underwood already has a distinguished career becoming her first landmark album marking the beginning of a new chapter for Underwood and is a milestone felt by not only the creator but her fans as well!  Underwood says “Musically, I feel like I am stronger than I’ve ever been I feel like I’m more confident in myself as an entertainer, as a songwriter, as a singer. I’ve definitely evolved, and it’s all been very organic.  The album has some songs that are a little more gritty and edgy, and others that have an $& B feel to them.  Then there are the songs that are just twangy.  We brought in a lot of different elements in a way that makes the album feel fresh and new.  I hope people just call it good music.”  Good music that tells a story and causes feelings so powerful they just wash over your entire body is the niche that Underwood hopes to achieve.  Each cinematic line coursing to achieve.  Each cinematic line coursing with emotion and carries the listener on an exciting journey that usually ends them on their feet singing and dancing along!  Her vocal range has been described as “enormous”, with critics highlighting her ability to hold notes for an extended amount of time and David Wild of Rolling Stone has praised her voice, saying that “she can hit any note” while Billboard describes her vocal ability as “freakish.”  Underwood has credited “music as a whole” as her major influence as she grew up listening to a variety of music from all genres and generations.  Stevie Nicks is quoted as saying “It’s a good thing you weren’t around when we joined Fleetwood Mac because I think you would have won the lottery on that one, and I would have been back to being a waitress.”  The possibilities are endless for the longevity of Underwood’s career there are singers, and then there is Carrie Underwood.  She is definitely in a class all her own and has raised the standard of talent across the board.  She also established the Checotah Animal, Town, and School Foundation in 2009 that helps her hometown community with general causes, needs and services for the local community.  Touring is Carrie’s way to connect with the fans on a more personal level, and she loves it, so far she has had two co-headlining tours American Idols LIVE! Tour 2005 (2005), Love, Pain and the Whole Crazy Carnival Ride Tour (2008) with Keith Urban.  As well as four headlining tours Carrie Underwood: Live in Concert (2006), Carnival Ride Tour (2008), Play On Tour (2010-11), Blown Away Tour (2012-13).  Her next tour is happening this year in support of her most recent album this will be her  fifth tour as well called the Storyteller Tour: Stories in the Round (2016).  Carrie Underwood puts on arguably one of the best live performances of any musician with her sensational singing voice, her incredible live performance sells out fast so if you want your chance to see Carrie Underwood performing live here is your chance in 2016!  An unforgettable experience for the whole family, Underwood's audience, knows no age nor gender so bring everyone to enjoy a night of singing, dancing, partying and just an all-around sensational experience!